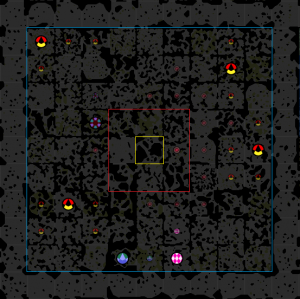 A room, is the main play field of Screeps and is a 2 dimensional plane measuring from x:0 y:0 at top left to x:49 y:49 at bottom right, each tile is given a type of terrain either plain, swamp or wall. Rooms are inter-connected by exit tiles on their outside edges, but an exit to every adjacent room does not always exist. Creeps can move around the room at a pace of one tile or roomPosition as long as their fatigue and movement parts allow. A room's name is determined by its location on the map, specifically by where it falls into a region. The first character of the string is either W for west, or E for east, followed by 1-3 numbers depending on distance from the 'center' (Note: Could be more with a larger map, but MMO only goes to 3), then another character either N for North or S for south followed by another 1-3 numbers. W0N0 Would be closest to the center, 1 room west and 1 room north, W62N38 would be 63 rooms West of center and 39 rooms north of center. sectors and rooms follow repeating patterns out from the center, it is possible to regex or process the string to determine the type of room it will be, which is useful for avoiding/finding types of rooms when pathfinding or other tasks. There are a few different types of rooms, depending on their features. 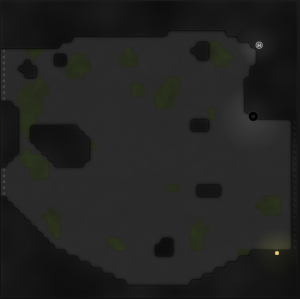