Difference between revisions of "Intermediate-level tips" 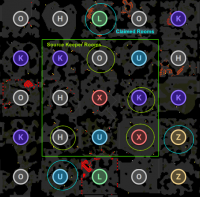 The above image shows an example of how you might settle around a group of SK rooms to get all the minerals needed with just 3 rooms. It is a bit rare to have this kind of diversity of minerals in one area, so you'll need to work with what you have available.