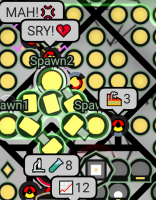 A popular tool used by many players, you can either set up your own https://github.com/screepers/screeps-grafana or use a hosted service provided by screeps+ https://screepspl.us/services/grafana/ This tool allows for the various display of graphs using data from the game, as you can store the data on your server / Screeps+, it also allows for long-time tracking of various things such as CPU, market prices, ect, to allow you to find some flaws or challenges that may elsewise be hard to spot in the short-term.